Discover the city together: Polish-German City Rally on 16 March in Görlitz 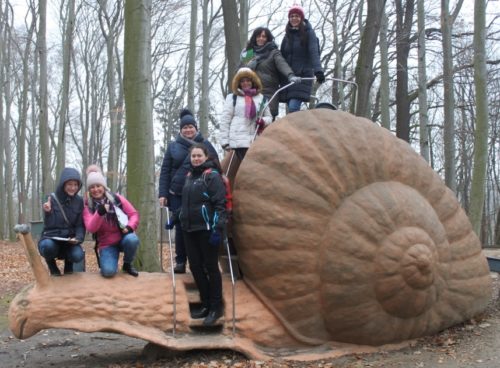 Winter had returned. Thick clouds hung over Görlitz, from which wet and cold snowflakes suffocated the budding spring once more. Nevertheless, it was a very special day for us – a day full of exciting encounters, fun moments, interesting insights and developing our neighbouring language skills.

As part of our Groß für Klein – Duzi dla małych [Big for Small] project:
We had invited cross-border cooperation to promote intercultural and education in the neighbouring language in the field of pre-school education" under the Interreg Poland-Saxony Cooperation Programme 2014-2020 to the city rally.

About 40 German and Polish teachers from the first pilot courses took up the invitation in the city of Neisse. Our cooperation partner, the "Christoph Lüders" Vocational School Centre Görlitz (BSZ) had prepared an exciting discovery tour of the city with its teacher training class SPE17. Six mixed German-Polish teams were put together randomly and the goals to be set were determined. For example, we went to the park railway, the Flüsterbogen (whispering archway), the Lutheran church, the Kaisertrutz (a fortified tower) or the city park. The participants had to answer three questions at the site. These were written sometimes in German and sometimes in Polish, so a knowledge of the neighbouring language was already needed.

90 minutes later, the teams met again in the BSZ to present their results to the others. Together, they also found the solution in German and Polish, which could be found from looking at the letters on the backs of the various team: “Kinder” / “Dzieci” [Kids].

In addition to strengthening our language skills in team communication, we also wanted to introduce the participants to the city through the rally. The teachers deliberately chose places where they could go with the children from their institutions in order to experience exciting things.

After a fortifying lunch, work continued on the German-Polish publication. Teamwork was also required here: in groups, various activities linked to traditions and customs in the two neighbouring countries were worked out, which then became part of the German-Polish guide to assist with practical work in the children's institutions. Numerous sound recordings with poems, rhymes and songs were also integrated. The educators and teachers made active use of the possibility of recording audio sequences.

It was great fun when it came to our animated language story about the experiences of Maus, Žába and Biedronka, which we wrote ourselves and presented in German as well as in Polish. All the participants had previously received hand puppets depicting one of the three animal heroes of the story. If the animals were mentioned in the story, the owners of the figure in question had to stand up and make themselves known by uttering a suitable animal sound. The atmosphere was great and it also improved vocabulary in a playful way without us really noticing. Now, of course, we hope that the teachers will try this story out in their institutions.

For us, this day was again excellent proof that learning and using our neighbouring language can be combined with fun, happiness and lots of experiences. All the participants were very committed and took away with them plenty of ideas for their own work. Special thanks go to Mrs. Brix and the specially chosen teacher trainees of the BSZ in Görlitz for their creative and committed preparation of the city rally. On the 25th of May there will be a second city rally – with our partner DODN in Jelenia Gòra. We are already looking forward to it!