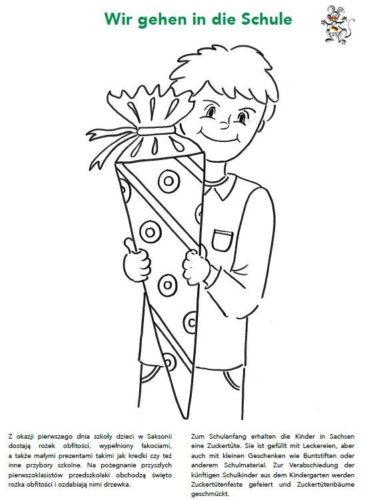 Next Saturday it will be that time again: many families in Saxony celebrate the start of school, before , before a new, important stage of life begins for the youngsters on the Monday, with the start of the new school year. The little ones in particular anticipate this day with excitement, and look forward to the sugar cone, which they will proudly carry home from school.

Did you know that a school cone or sugar cone for children starting school is a German custom that dates back to the 19th century and started in Saxony? It was children starting school in Saxony and Thuringia in particular whose day was made sweeter. The first confirmed evidence comes from Jena (1817), Dresden (1820) and Leipzig (1836). Since then, the tradition of the school cone has expanded to the entire German-speaking area, but is still followed to a particularly great extent in Central Germany. The oldest production facility for sugar cones – the Nestler company in Ehrenfriedersdorf – is also located in Saxony.

And how do our Polish neighbours start school? The German and Polish day nursery teachers who took part in the first pilot course for the German-Polish advanced training "Groß für Klein - Duzi dla małych" (Big for Small) swapped places in discussing festivals and traditions in the two neighbouring countries. While Polish colleagues learned how children on their first day of school in Saxon nurseries are bid farewell with a sugar cone festival and how sugar bag trees "grow", the German participants learned that the summer holidays in Poland last 8 weeks and that the new school year always starts on 1 September, albeit without a sugar cone. In order to familiarise the children in Polish day nurseries with the traditional sugar cone of their Saxon neighbours, the German-Polish handout developed as part of the pilot course now also provides material with which to create an activity based around the sugar cone. This is supplemented by two colouring-in pages in the new Colouring Book "Z Biedronką i Maus przez cały rok - Mit Biedronka und Maus durch das Jahr”.

Would you like to learn more about similarities and differences in festivals and customs in Saxony and Lower Silesia and would you like to share them with your children in the day nursery? Then take advantage of the opportunities offered by the German-Polish "Big for Small - Duzi dla małych” project, with newly developed materials for use in the nursery. The colouring book and handout can be found at https://www.nachbarsprachen-sachsen.eu/de/deutsch-polnische-publikationen.html and are available for download, free-of-charge.

LaNa wishes all children starting school on both sides of the River Neisse a good start in the new, exciting phase of life and lots of fun while learning!