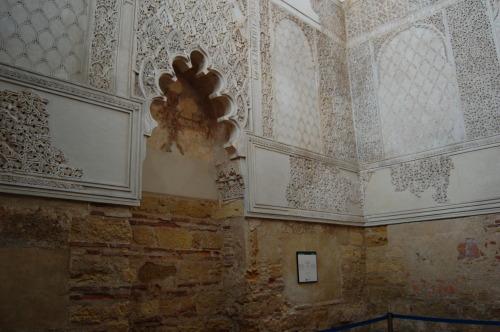 The ‘city of three cultures’: closer to its past.

If you could show a tourist just one painting to give them an idea of the city of Cordoba (Spain), this would be Poema de Cordoba, by Julio Romero de Torres. In this work the Cordoban artist displays in the most accurate way possible the character that has defined this Andalusian city since it was founded: its multiculturalism.

In this series of paintings we see allegories of the city’s Roman, Jewish and Christian heritage; its warrior spirit; its religious soul; and its more festive side, represented by a Cordoba bullfighter. Cordoba has been inhabited by different groups of people from around the world who have lived side by side, leading to it being known as the city of three cultures.

The city’s past as a cultural melting pot is reflected in its streets, the main example being the famous Mosque-Cathedral of Cordoba, the only one of its kind in the world and a UNESCO World Heritage Site. But that is not all. Wandering the streets of the Jewish quarter we find hidden a small historic building which is nevertheless of incalculable value: the Synagogue of Cordoba.

My friend, Alvaro, who studies Fine Arts in Cordoba, accompanied me there one morning and explained why it is so important: ‘This building is unique, not just to Andalusia but to Spain as a whole because of its Mudejar style, which combines Christian and Muslim artistic and architectural influences. It also encapsulates the character of Cordoba because after it was used as a synagogue, it served as a chapel. Furthermore, this building dates back to the beginning of the 14th century, so its age adds to its importance’.

At the entrance we met Francisco, ‘although everyone calls me Paco’, he told us. Paco has been guarding the entrance to this spectacular monument for over four years. When I ask him about the monument he only has good things to say: ‘It is very old, extremely old! It dates from 1314 and there are only three like this in Spain; the other two are in Toledo. But it is very special; it is the second most visited monument in Cordoba after the Mosque-Cathedral!’ I sense in his words a love for this monument, although this was not always the case. ‘At one time there were damp spots everywhere. Sometimes birds would fly in through the window and stay inside, ruining everything. Also, there was so little space that the queues would cut across the street’, Paco told me. As a result, the Government of the Autonomous Community of Andalusia decided to carry out the necessary restoration works in early 2017 under the Network of Cultural Space in Andalusia (Red de Espacios Culturales de Andalucía - RECA), which pursues an ‘integrated and united system made up of the Cultural Spaces located in the Autonomous Community’.

This restoration, which was completed in mid-2018, cost a total of EUR 307 536, 80% of which came from the European Regional Development Fund. ‘The building was restored using EU funds’, Paco tells me when I ask him about the works. They lasted six months and improved all the facilities on the site. An adjacent plot of land was purchased on which to build a visitor centre to enhance the experience of visiting the synagogue. While these works were under way, the remains of the Roman wall which at one time surrounded the city were unearthed, as well as a mikveh, a bath used for ritual immersion in Judaism. These will be displayed as additional aspects of the visit in the future visitor centre.

With the help of European funds, which contributed greatly to the financing of this valuable restoration, other goals set under RECA were also achieved: innovative elements were added with the visitor centre and accessibility to the monument improved, the monument’s conservation problems were remedied and the number of visitors increased by almost 10%, bringing the number of visitors to over 600 000 by the end of 2019. ‘Although now with coronavirus there are fewer people’, Paco tells me, adjusting his face mask.

Alvaro, who accompanied me that morning, told me that the improvement was plain to see, that the monument looked more splendid and much better conserved, but hadn’t lost its essence. On leaving we had the chance to talk to some daring tourists who were visiting Cordoba during the Covid-19 pandemic. A French family told us that they were enchanted by the synagogue; ‘it’s not as well-known as the Mosque-Cathedral but it’s just as beautiful, if not more so’. A group of friends from a nearby town were even more enthusiastic: ‘Incredible. There are no words’.

After asking them for their impressions, we told them that the restoration was financed, in the main part, with European funds, to which the French family replied: ‘the European Union is most necessary!’. And it certainly is, because thanks to European funds Cordoba continues to proudly display its past, which is what makes it such a unique city: the city of three cultures.