What is a biologist doing on a fishing boat? 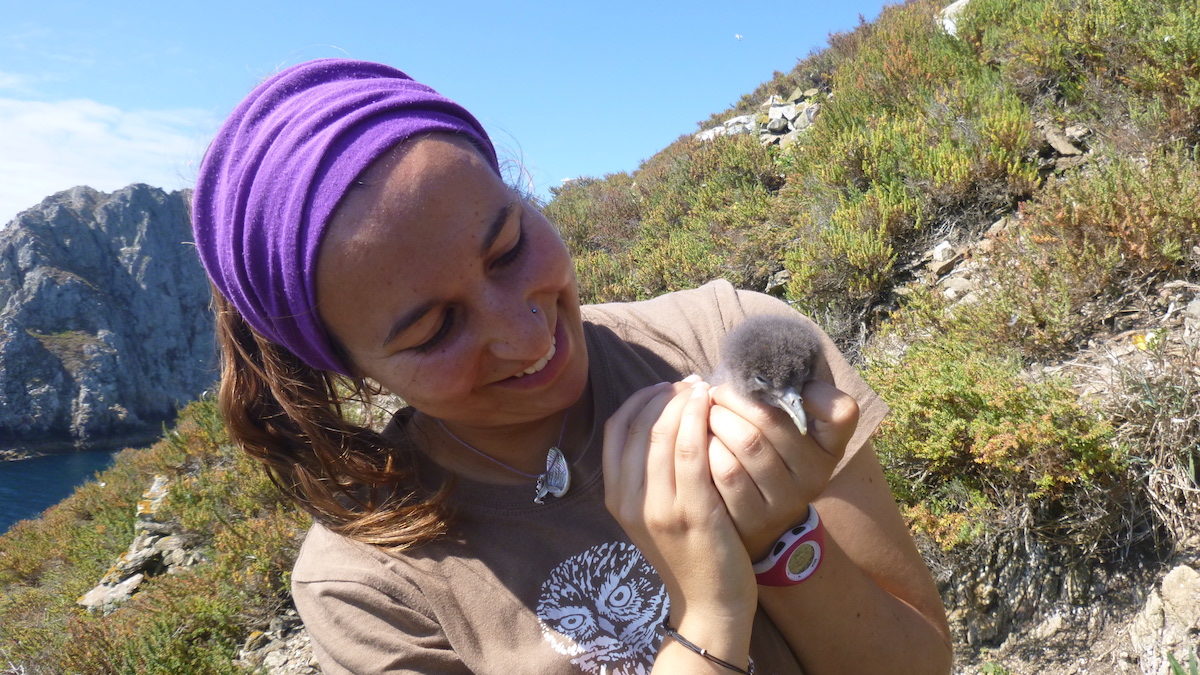 The Portuguese Society for the Study of Birds (SPEA) carried out the MedAves Pesca project up until 2020 to discover what impact fishing has on seabirds in Portugal’s Special Protection Areas. Elisabete Silva works with the fishermen of Berlengas to develop and test measures to limit the by-catch of birds.

At one end of this seven-metre-long boat, on which the fishermen use hooks and lines, Pedro Santos and Zé Manel pull in the lines that were dropped into the sea the previous day. The experience and strength of these men belie the difficulty of the task at hand. With synchronised movements and in companiable silence, the two fishermen pull dozens of hooks out of the water in just a few minutes. ‘This is a big seabass’, exclaims the master happily.

The birds in question dive into the sea to hunt food and can get caught in the nets, lines and hooks. ‘When the birds get tangled up, it isn’t always possible to rescue them in time’, says the researcher sadly.

One of the aims of MedAves Pesca is to create strategies to mitigate the impact of fishing and to reduce the by-catch of seabirds. One of these strategies is to use a type of paper kite. ‘It is a kite made of black waterproof fabric connected to the buoys that support the fishing gear’, explains Elisabete. This is designed to look like there is a predator a few metres from the water. It is hoped that the movement of this ‘bird’ will discourage other birds from approaching.

The Dois Filhos boat spends the morning sailing around the Berlengas archipelago. Throwing the equipment into the sea, collecting the longline - this is the art of fishing, using one main line to which secondary lines are attached at regular intervals, each with a hook at the end.

Today mashed crab is being used as bait. ‘We have to make sure that they bite. Pedro is an expert at getting the fish to bite the crab’ says master Pedro Jorge. For each throw Pedro and Zé Manel prepare the bait and, at the spot indicated by the master, throw the hundred hooks into the sea with speed and dexterity. A block of submerged concrete marks the beginning of the action, another will mark the end. These will serve as ballasts for the lines near to the surface. White and yellow buoys indicate the location of the longlines and who they belong to. This technique and bait are used to fish seabass (Dicentrarchus labrax) and gilthead seabream (Sparus aurata). ‘These are the species with the greatest commercial value and even more so if they are line-caught’, explains Pedro Jorge, ‘but sometimes a common seabream or some white seabreams also get caught in the net’. ‘It’s the best fish in the world, no doubt about it’, he concludes.

The boat advances a few metres towards an improvised buoy made of white polystyrene. It’s time to collect the lines - or ‘hauling’ as fishermen call it. Luckily, the hauling brings in fish that will go to the fish market this afternoon. This scene is repeated several times over the course of the day. There are 18 containers - types of troughs or basins - on the boat, each containing a set of lines and one hundred hooks hanging on the cork edges, ready to be thrown into the sea. ‘We’ll throw in another twelve before stopping for a bite to eat, promises the master.

Pedro Jorge, who has been working in this field for nine years, exudes happiness during the trip. The sound from the radio is intermittent and muffled by the sound of the engine but he sings along with enthusiasm. The name of the boat is a happy coincidence. ‘It already had this name when I bought it but as I have two sons (dois filhos in Portuguese), I kept it, he chuckles. But it is not by chance that he is participating in a conservation project of this kind. ‘We are always trying to innovate and we will take part in anything that is important for the region’s development’.

The island of wonders, a sanctuary for birds.

A day spent fishing is now a normal day for Elisabete. Over the last two years she has taken more than 100 trips and spent almost 1 000 hours at sea. The rapport she has with the fishermen is plain to see and of vital importance. ‘We are always dependent on them to do our work’, says the researcher. ‘It is challenging at the beginning because they mistrust us, they think that we’re there to check up on them. It was a work in progress and now we have built up trust’, she adds. It is clear that they trust her. Despite being the only woman on the boat, the fishermen treat her as an equal and as just another member of the team. ‘One of the best things is interacting with the fishermen’, she says.

One of these moments of interaction happens on the island of Berlenga. Lunch is shared in the company of the local community in the Bairro dos Pescadores (fishing quarter), a small cluster of ten to twelve houses, a mini fishing village nestled on the south side of the island. Berlenga has only five permanent residents: two lighthouse keepers from the Portuguese Navy, two wardens from the Institute for Nature Conservation and Forestry and a friendly dog aptly named Farol (meaning lighthouse). The fishermen come here to rest on the days that they do not return to land.

Elisabete walks around the whole island. The winding paths that twist and turn around the 1 500-metre length and 800-metre breadth of Berlenga hide few secrets. As a biosphere reserve and protected area, Berlenga is a singular green plateau that extends almost 80 metres high in the middle of the Atlantic, circumvented by slopes, hills, caves, a fortress and a small beach. The lighthouse dominates the highest point. A frequent sight on the path are the Bocage's wall lizards (Podarcis bocagei), which quickly run and hide in the cracks in the rocks or in the dense brush.

On a clear day other groups of small islands in the archipelago are visible: Estela to the west and Farilhões further north. These islands provide an excellent home to seabirds with the conservation status of vulnerable. They can be seen all around these islets, both on the ground and spreading their wings in full flight. ‘Look, a northern gannet’, points out Elisabete. ‘A peregrine falcon couple come here to nest once a year’, she explains. Elsewhere there are nests made by European shags and shearwaters. ‘This is a sanctuary for birds’.

Now it’s time to go back to port. The high sun marks the end of the day at sea for the Dois Filhos boat, almost 12 hours after it set sail. As we sail towards the shore, the Berlenga lighthouse is replaced by the Cape Carvoeiro lighthouse. It is almost as if there were an imaginary line between the two. Further on, beyond the historic Peniche fortress, the two jetties at the port look like the arms of the city welcoming back the fishermen and the life that the sea gives them.

Master Pedro Jorge tilts his head and surveys the day’s catch. ‘There are about 40 kilos of fish there, it wasn’t a big catch’, he says in an attempt at modesty. ‘On a good day we get more than one hundred’. For Elisabete, the outcome is extremely positive. The day has ended without any birds getting caught in the fishing lines. ‘Sadly this isn’t always the case’.