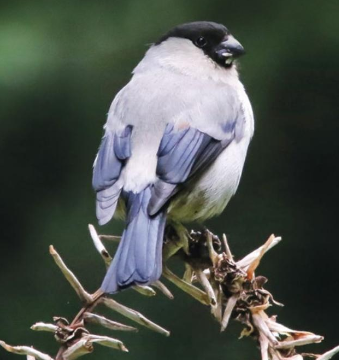 Much more than just saving a bird

15 years working in the Terras do Priolo district of  São Miguel island in the Azores demonstrate that, as Azucena de la Cruz says, “nature conservation can be an opportunity to improve well-being for people, too”.

For a rare bird, the ‘Priolo’ or Azores bullfinch (Pyrrhula murina) seems surprisingly common. In the municipalities of Nordeste and Povoação in São Miguel –  known as the Terras do Priolo or the Lands of the Azores Bullfinch – there appears to be one around every corner: its stylised outline can be seen promoting restaurants, accommodation and shops sporting the Priolo label. This visibility demonstrates how the conservation work to protect the Azores bullfinch over the past 15 years has won a place in the affections of people living in this part of the island.

Almost 50 businesses sport the Priolo label. “It’s a label recognising companies that voluntarily commit to improve their performance and contribute to developing a more sustainable way of doing business”, explains Azucena de la Cruz, coordinator of the Azores branch of the SPEA, the Portuguese Society for the Study of Birds, together with Rui Botelho. The label was created as part of ongoing conservation projects and is currently managed by the Government of the Azores, in collaboration with the SPEA.  In order to be allowed to bear the Priolo label, a business commits to rolling out three specific projects over three years to enhance its environmental or social sustainability. It may, for example, take action to reduce its ecological footprint (saving water and energy, reducing the waste it produces), use local products, support social entities in the municipality, collaborate with environmental volunteering projects, make donations to conservation projects or get involved in environmental education.  After three years have elapsed and the three activities proposed have been implemented, the business can apply for another three years, with another three projects. “It’s an ongoing improvement process”, emphasises Azucena de la Cruz.

Every year, businesspeople involved in the Priolo label can be found in a hall somewhere in the Terras do Priolo, affixing coloured stickers to sheets of paper. Each sticker represents a vote for a priority to be given to a particular action, and each participant has five votes to distribute how they wish, thus helping to define priorities. The exercise is part of the annual general meeting of the Terras do Priolo European Charter for Sustainable Tourism group.

Terras do Priolo received this award for the first time in 2012. It was renewed in 2016 with a new plan of action. Like the Priolo label – which is, incidentally, an action developed under the Charter – the Charter for Sustainable Tourism is a work in progress, the aim of which is to make tourism in the region ever more sustainable. There are currently 10 entities involved in administering the Charter, including the SPEA, which have committed to developing actions ranging from reforestation to promoting accessibility, creating signage and implementing rules for practising sport in conservation areas. Many of these actions require coordination and collaboration between various public and private partners, hence the need to define common priorities.

The discussions around sustainability continue beyond the four walls of the hall where the annual general meeting is held: a recent study showed that businesses in these two municipalities are among those that use the term ‘sustainable tourism’ most in the Azores.

At the reception of the Priolo Environment Centre, Ana Mendonça sees every day the impact of the conservation work on the demand side of tourism. When the Centre opened in 2007, people came to ask what the Azores bullfinch was. “Now we have more and more people coming specifically because they have heard about our conservation work and want to know more” says this SPEA staff member, responsible for receiving visitors and taking them on guided tours. Schools are also increasingly using the Centre and the learning activities that the SPEA offers.

The Priolo Environment Centre is the most visible piece of infrastructure created under the auspices of projects to conserve the species, but is not the only one to serve the public. The native plant nursery, created for the new laurel forest needed to replace invasive plants and to give shelter and food to the Azores bullfinches, also produces some plants for parks and private gardens,  and the paths cleared in the natural reserve for the SPEA team to do their work could, if there is sufficient interest, be adapted for use as tourist routes.

Far from the tourists and the populated areas of the island, on the Graminhais Plateau, José Pacheco and his field team have been able to turn back time. Originally, this high plateau was covered in wetland, dotted with spongy peat bogs. In the 1970s, these peat bogs were drained to create the ‘typical’ pastureland of the Azores,  with the result that the island lost one of its natural reservoirs of water. Financed by the Life Laurissilva Sustentável project (which ran from 2008 to 2012), José Pacheco and his colleagues brought back the peat bogs, and the high plateau reverted to a landscape dominated by water, enhancing the capacity of the region to resist drought  – set to become increasingly important in the light of climate change.

“Everyone understands the link between the peat bogs and the water supply”, says Azucena de la Cruz, but there are other benefits which are less obvious.

Every winter brings landslips in São Miguel. With the news full of reports of roads cut off and houses in danger, the Azores bullfinch is not the first thing that springs to mind. But the work to protect this bird may also help to stop these landslips repeatedly occurring. Invasive plants have to be removed to restore the laurel forests. But removing plants on very steep slopes increases the risk of landslips. For this reason, techniques have been developed using native plants and other natural resources to stabilise the steepest hillsides and slopes. Using native plants, wood and rocks, the slopes can be shored up and water diverted so that it does not erode large amounts of material, even in the event of torrential rains such as those that commonly hit the island in winter.  “These are techniques which are already used to restore rivers in other places, but we have adapted them for the Azores, using native plants,” says Azucena de la Cruz. These techniques, developed on the remote slopes of the Pico da Vara, can well be applied in more populated areas.

The landscape of this region is changing — and not only in the forests and protected areas. “Ever more people are asking us for native plants for their gardens, which is something nobody thought about before the project” says Azucena de la Cruz proudly. This shows just how the native plant nursery has become a resource for the whole population, and the pride in her voice is evident whenever Azucena talks about the positive impact that the project is having on people’s lives.  “Right back when we started Life Priolo (the first SPEA project to protect the Azores bullfinch), we realised that, if we wanted to protect it over the long term, we had to create opportunities for people, so that they would start to see the Azores bullfinch as an opportunity for economic development”, says Azucena de la Cruz. Of course, this also applies to the financial side.

“It’s not just the bullfinches who benefit from the money flowing from Europe and the Government of the Autonomous Region of the Azores for these projects. We invest it in the region: boosting the economy, creating jobs, encouraging retail sales and creating infrastructure” stresses Azucena, quoting figures. In all the projects to conserve the Azores bullfinch to date, three quarters of the money received has been spent in Terras do Priolo. Most of the rest has been spent in other parts of the Azores, with 90% of the financing remaining in the Autonomous Region. In addition to the direct impact on persons employed and businesses from whom materials are purchased, the investment contributes an average of EUR 12 550 a year to the regional budget, in the form of VAT receipts.

Boosting the economy , creating resources, improving water quality and developing resilience against climate change. These are just some of the aspects that Azucena refers to in the presentations she gives on the impact of the project, when she speaks to policymakers, potential financial backers or other conservationists who come here to learn about what has happened with the Azores bullfinch. But if they ask her to talk about the impact on the human population, she reverts to her personal experience. “Now, when they ask me what I (a Spaniard) am doing here, I say that I’m “working with the bullfinches”, and people understand. I don’t need to explain further.”

“The Azores bullfinch is one of us”

“When I arrived in 2006, people were not bothered about the Azores bullfinch, one way or the other”, recalls Azucena. Fifteen odd years of work with them has turned this indifference into pride. “We are working to protect something that is unique to this part of the island, and people have embraced it. They take pride in saying ‘The Azores bullfinch is one of us’. And if you ask someone from Nordeste, they’ll tell you it’s from there, not even from Povoação”, she grins.